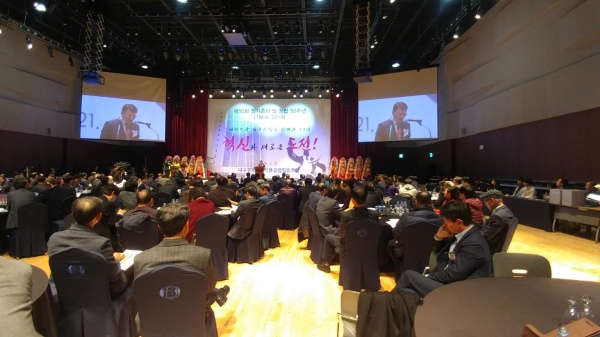 Daegu Gyeongbuk Textile Industry Cooperative(chairman of the board Seokgi Lee) a commemorative event for the 50th anniversary of its foundation and the 50th general assembly were held on February 21th, 2019 afternoon 5:00 on the second floor multipurpose hall in Daegu Textilecomplex participated by more than 200 people who are from Daegu, Gyeongbuk, Busan, Gyeongnam, Jeonnam, Chungnam, etc in great success.

This event was opened by congratulatory addresses delivered by Youngjin Kwon, Daegu Metropolitan City Mayor as well as Heegap Moon, a chairman of 'Blue Deagu Growing', a meeting of the citizens, leading to a remembrance address of Jichul Lee, a president of Geonpung Co., Ltd.

In succession, awards to textile fabrics 6 men of merit, providing scholarships for 12 children of persons working for fabrics, presentations of merit plaques, cutting celebratory rice cakes and celebratory performances went along in order.

​Daegu Gyeongbuk Textile Association which started on January 7th, 1969 has been playing a role as a cornerstone of economic growth, accomplishing making a recommendation for creating industrial bases and policy makings, human resource training, introductions of advanced technology, new product development and various business developments regarding pioneering the domestic and overseas markets.

" Textile industries are expected to be hopeful industries eternally and play a role as the bridgehead of sustainable growths. Therefore we have to overcome together cooperating centered on the association for re-leap of textile industries."

On the other hand, Daegu Gyeongbuk Textile Industry Cooperative has released and disseminated 50 years of the association organizing the footsteps in the meantime.